In August 2018, Dr. Jean Wilson hosted a group of Artsci grads at her summer residence in Thunder Bay, Ontario. The group, which featured alum from a span of more than 15 years, all coincidentally live in the Thunder Bay area, but not everyone had met prior to the gathering. It was fun times for all, and likely something that will continue in upcoming summers. Attendees, from back to front and left to right, were Michael Wilson (1991 grad), Bill Harris (1993 grad), Ken Blonde (2007 grad), Jesse Hawkins (2006 grad), Don Kerr (1991 grad), Jean Wilson (Artsci Director and Lit prof), Chi Cheng (1993 grad), Melissa Mauro (1995 grad), and Emily Groot (2007 grad).

On 14-15 October 2016, Artsci faculty and students from the first year of the Program (1981) to the present gathered to celebrate the Arts & Science 35th anniversary. The University Club on Friday night was certainly loud and lovely, filled with the music of Kaffeehaus and the conversation of Artsci alumni enjoying Milk & Cookies (35th reunion edition). On Saturday, activities included an Open House in C-105, an Alumni Engagement Workshop in the Council Chambers, and a gala dinner in CIBC Hall, complete with Trivia (35th reunion edition) and exceptional speeches by Dr. Herb Jenkins (founding Director, 1981-90), Dr. Sara Mendelson (who, with Dr. Alan Mendelson, taught ARTSSCI 1A06 and 4CT3 to generations of students), Dr. Gary Warner (Director, 2000-05, 2010-11; team-taught ARTSSCI 1C06 for many years and, more recently, helped launch 3GJ3), and Dr. Bob Henderson (longstanding ARTSSCI 4CM3 prof. and, more recently, co-facilitator of 3IE1 module “Winter as Place”).

Sincere thanks to all the current students who helped out: Jamie Beverley and Matthew Jordan (Kaffeehaus); Mythili Nair and Balie Tomar (Alumni Engagement Workshop); Marina Bredin (with behind the scenes help from Gali Katznelson and others), Alison St. Pierre, and Spencer Williams (Trivia, and hosting duties at Gala Dinner). Special thanks to Shelley Anderson (Program Administrator), responsible for the heavy lifting (literally, more than once), and to recent Artsci grad Chris Litfin for taking care of all the A/V needs. It was a wonderful celebration of Arts & Science—an extraordinary community, for which many expressions of gratitude certainly resounded throughout the weekend.

Held on Saturday 19 December 2015 at 8pm at the Harbord House (150 Harbord St., Toronto). The time capsule that was created before graduation was opened at the event and a new one was created!

Held on Saturday 26 September 2015. The event was organized by Evan Jones and Johanna Weststar at the Bedford Academy in Toronto. 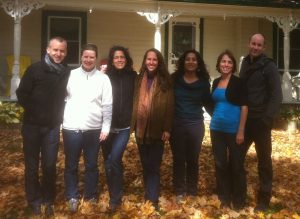 The Class of 1993 held a reunion in Prince Edward County over the weekend of 3-5 October 2014. In the photo: Rick Hendriks, Marie Laird, Melissa Mauro, Liz Darling, Farah Mawani, Sherry Telford, and Chris Ullock. Not pictured: Amanda Garay and Robert Brookfield. 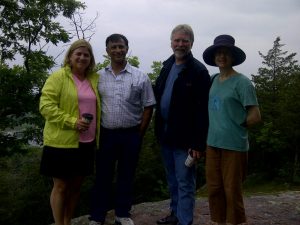 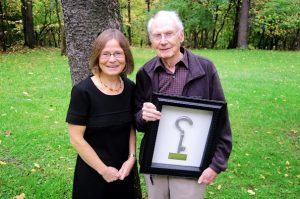