An Experiential Learning Adventure in the Easternmost Corner of Canada 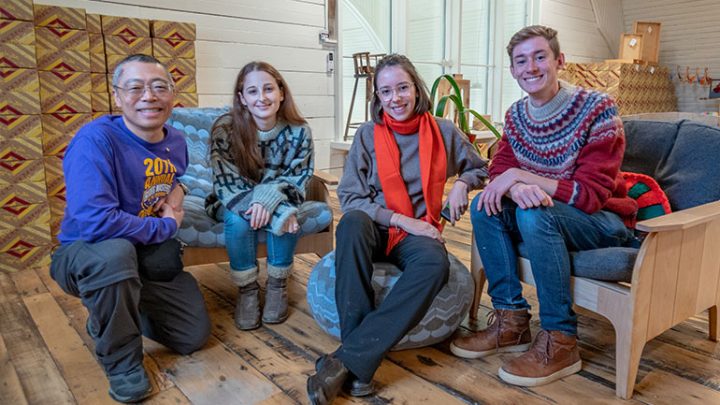 About 3,000 kilometres away from McMaster University, nestled in the easternmost corner of Canada, lies a small outport island called Fogo. Enigmatic in that it is both little-known and also world-renowned, the island is culturally rich, full of vibrant and hospitable people, and is the only place on the planet that experiences seven different seasons (winter, pack ice, spring, trap berth, summer, berry, and late-fall). Despite all of that, though — and despite the fact that it’s physically detached from mainland Newfoundland and Labrador — it is actually Fogo’s community-based economy that separates it from the rest of the world.

1984 Arts & Science graduate Bruce Miyashita has been fascinated by the island’s business model for years. So much so, in fact, that he discussed it at length during a 2017 career workshop held by McMaster’s Arts & Science Program. 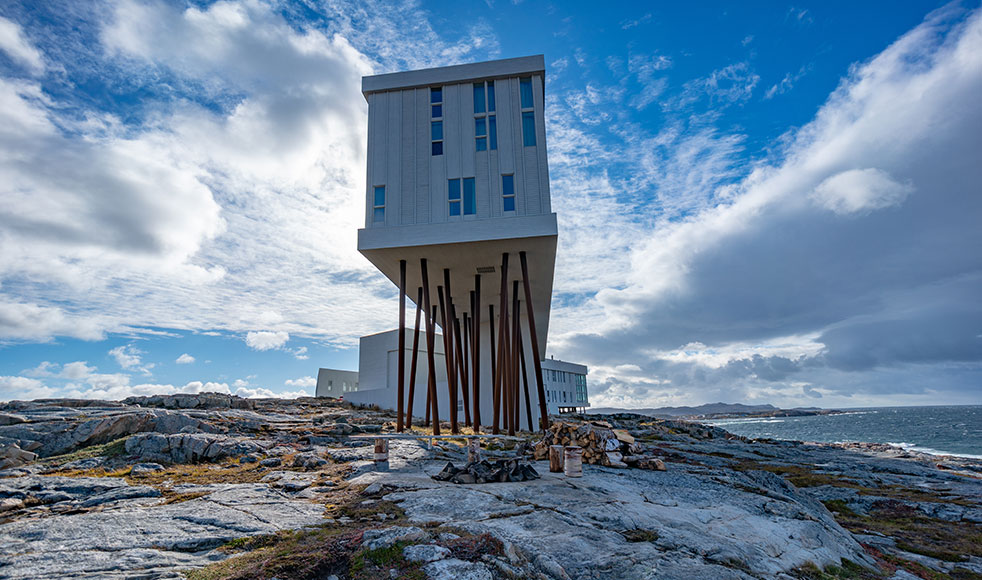 “I visited Fogo about four years ago as a guest at the famous Fogo Island Inn,” he says. “I quickly learned about the community-based capitalism model that the owner and innkeeper Zita Cobb has created there, and I was honestly blown away.”

Apparently, so too were the students who attended his workshop. Miyashita says that he was approached by Artsci student Luiza Araujo, eager to learn more about the Fogo Island business model, “about two seconds after the workshop ended.”

“As he was talking, I was just thinking to myself that it would be so incredible to visit Fogo to learn more about their social business model and to somehow bring that information back for the students here,” Araujo says.

Her classmates Michelle Zilbergerts and Ian McIntosh also quickly joined the conversation, and after consulting with Arts & Science Program Director, Dr. Jean Wilson, who knew of Socrates Project Director Rina Fraticelli’s interest in exposing students to initiatives on Fogo, Miyashita was able to tell the trio of students that, if they were serious about learning more, he would show them around the island during an upcoming Reading Week. One year later — in October of 2018 — an Arts & Science Program/Socrates Project collaboration allowed him to make good on his word.

“Visiting the island seemed like a really great opportunity for us to witness interdisciplinary thinking first hand,” explains McIntosh. “And the trip absolutely delivered. We were able to talk personally with many of the people driving change on the island, and we learned about their innovative approaches to problem solving and learning. We were introduced to artists, small business owners, carpenters, and fishermen, all of whom were thriving from Fogo’s continued development.”

Those meetings, Miyashita says, were an important part of the trip. He says that the primary goal of the three-day excursion was to expose the students to as much of the Fogo Island business structure as possible. This meant interviewing business moguls, financial leaders, and other VIPs, chatting with locals, as well as visiting important industry hubs like the Woodshop and the Fogo Island Inn.

“On Fogo Island, they’re big believers in the philosophy of culture, nature, and business living harmoniously — and, frankly, so am I,” Miyashita says. “I wanted today’s Arts & Science students to see that. I want them to know that capitalism can be a very positive thing if you construct it as such.”

The way in which Fogo Island constructs its business model is the brainchild of an organization called Shorefast, founded by the aforementioned Cobb, whose mission is to “build cultural and economic resilience on Fogo Island.” 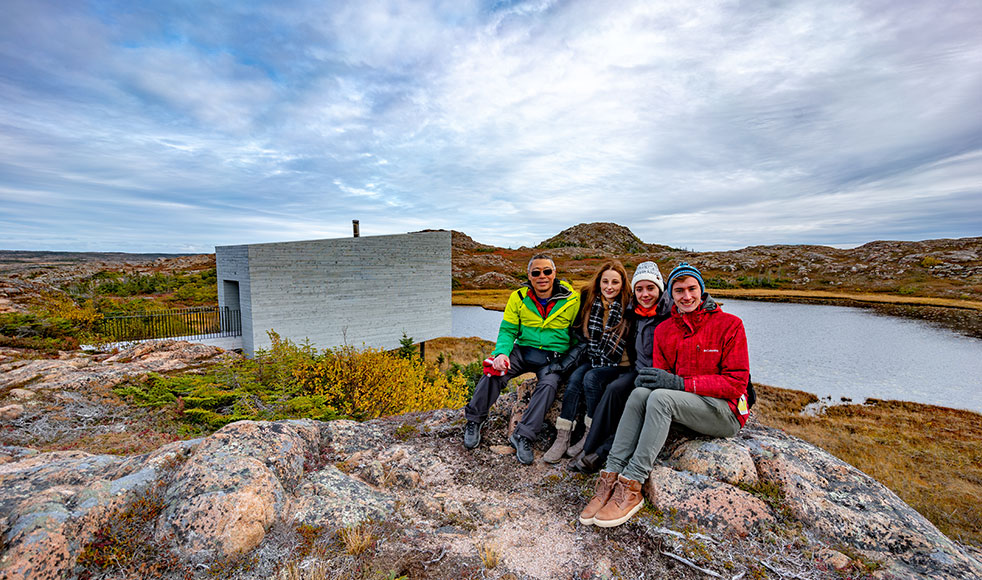 Notice that culture comes before economics in that mission statement. That’s exactly the approach that Cobb and Shorefast took to revitalizing the island. Their first move was to develop a series of art galleries. Then they built the famous Fogo Island Inn. They established roots in boatbuilding, modern architecture, geotourism, academics, furniture crafting, and cuisine. They gave islanders and tourists alike the means to become inspired, which ultimately invigorated the island for the first time since a 1992 moratorium on cod fishing debilitated it.

The Inn is the beating heart of the island’s cultural and economic identity. But with only 29 rooms — an ecological preservation measure — the cost of staying there is exorbitantly high (upwards of $2,800 per night). Yet it is consistently booked solid.

“Why is she charging all that money? And why are people paying it?” asks Miyashita, rhetorically questioning Cobb’s business model. “Well, it costs a lot of money to run The Inn and she wants to pay a fair wage to the local employees. She also wants to ensure that it supports the local economy. So, she crunched numbers and calculated a stay’s true worth.”

“The excess profit goes into local not-for-profit activity,” Miyashita says. “One such example of that is oceanographic research. They bought a boat, hired a staff of scientists, and are attempting to jumpstart research into the local ocean and cod fishery. The surplus also contributes to the Fogo Island Arts Foundation, through which they fund residencies for budding artists from all over the world.”

The McMaster entourage had a chance to speak with some of the resident artists during their visit, and, for Zilbergerts, it was the highlight of the trip.

“We went to a restaurant called Bangbelly and we ran into some artists there who were participating in the Fogo Island Arts Foundation’s residency program,” she says. “It was really interesting to talk with them and learn about their backgrounds. These people came from all over the world — Thailand, Germany, France, England — so it was really cool to experience so much diversity in one little place.”

The group was joined by Rina Fraticelli, Director of McMaster’s Socrates Project, who was scouting possible Fogo/McMaster collaborations. Already, she and Cobb have ironed out preliminary plans for a work exchange program that would send McMaster students to work on the island for a summer while a handful of Fogo residents come to Hamilton. 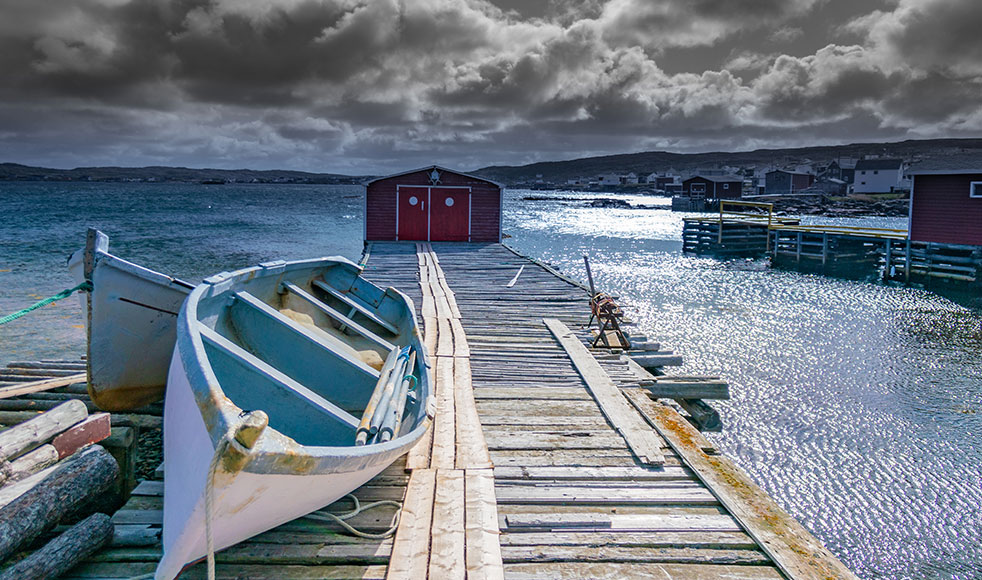 Fraticelli believes that, despite their many surface differences, Hamilton and Fogo Island have a lot in common.

“You know, as different as they may seem, both communities are undergoing rapid transformation from one traditional industry to another,” she says. “We’re even tentatively calling this project ‘Cod and Steel’ to emphasize that. Although scale, geography, mass, and population couldn’t be more different, the essential issues of the two communities are very much the same.”

While every member of the McMaster detail gained something from the trip, it was truly a life-altering experience for Araujo and Zilbergerts, both of whom are pursuing a combined honours degree in business.

“The trip is definitely one of the highlights of my undergrad experience,” says Zilbergerts. “Learning about such a unique culture completely changed my perspective of business and how I view the world.” 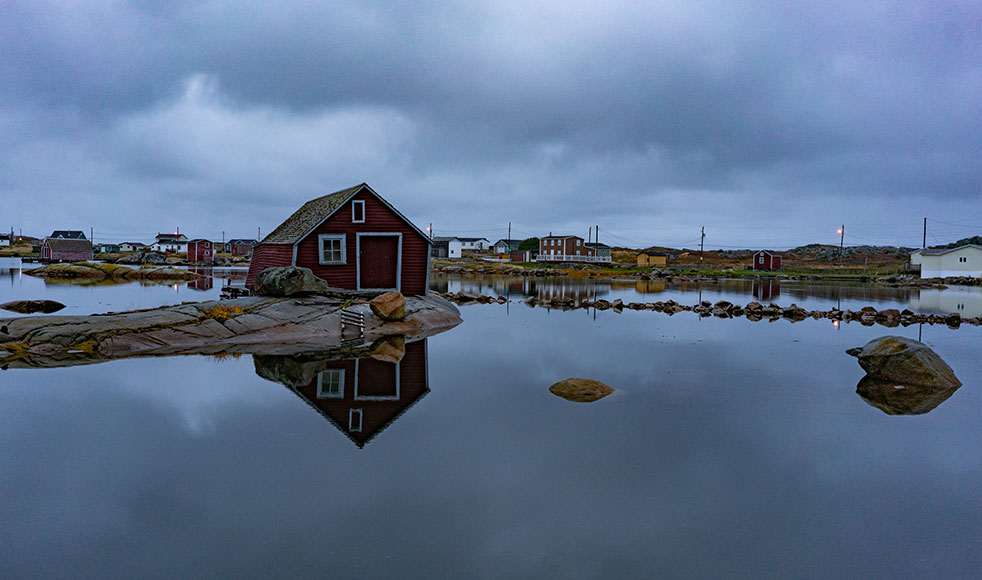 “It was eye-opening,” echoes Araujo. “I had been dealing with this internal struggle for a while that was pulling me between loving business and knowing that capitalism is bad for the world, but all of the sudden I was exposed to a solution — a capitalism model that was good. The trip was extremely impactful for me and it has completely changed how I understand my business education.”

For Miyashita, the trip was as successful as he had hoped it would be. He packed a lot into their short stay on the island and feels that both he and the students benefitted greatly from this experiential learning excursion.

“It was an interesting exercise to expose them to a very different business philosophy,” says the Artsci grad. “I wanted to give these students something above and beyond what they’re getting in the classroom — and they got that. But, honestly, I think I learned way more from them than they did from me. We had a really great time travelling together.”

The three Arts & Science students who participated in this trip created a short film about their journey, which can be viewed below. Bruce joined them for a debut screening of the film in LRW-3038 on 13 Nov 2019.