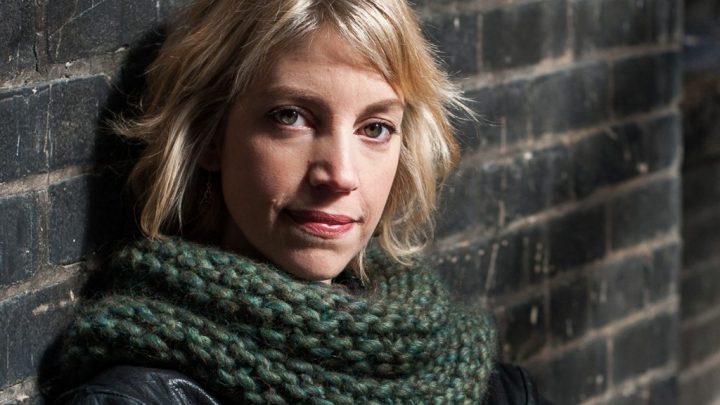 It was announced today that Sarah Henstra, a 1996 graduate of McMaster University’s Arts & Science Program, has won a Governor General’s Literary Award.

One of the greatest honours in Canadian literature, the prize is bestowed annually to Canadian authors who display literary excellence in a series of categories ranging from fiction and non-fiction to poetry and young people’s literature. Henstra’s book The Red Word won in the category of English-Language Fiction.

Henstra says she was in disbelief when she found out that she had won the prestigious award.

“It’s been a little crazy,” she says. “I was in a café doing some writing when I received the news and it was honestly very surprising. I had really hoped that I’d win, but I kind of reconciled deep down that it likely wouldn’t be me. I even asked if they were joking when they told me!”

Set in the 1990s, Henstra’s book tells the story of Karen Huls, a Canadian student in her sophomore year at a U.S. college who finds herself at the centre of a war between feminist activism and misogynistic campus culture.

For Henstra, having The Red Word win this award is extremely gratifying — not because of the personal accolades, but because it reaffirms to her the importance of her work.

With the news still very fresh, Henstra isn’t sure how this award might impact her as an author going forward. However, even since being nominated earlier this month, she’s noticed liberation as a writer.

“I’ve been noticing that I feel more creative permission to go deep into new topics and to challenge myself as a writer,” she says. “I’ve noticed my boundaries are expanding creatively, which is something that raises the bar for me.”

Though she graduated from McMaster more than 20 years ago, Henstra believes that her time in university really laid the foundations for her eventual success as an author. In fact, she specifically credits her undergraduate studies for helping her develop into the person she is today.

“The Arts & Science Program at McMaster University still features so heavily into who I am as a writer, as a thinker, and as a member of my community,” she says. “The professors who taught there invited me to think and ask questions in a way that I’d never encountered before and have rarely encountered since.”

Founded in 1936, the Governor General’s Awards are among Canada’s oldest literary honours. Each year, a total of 14 awards are presented to Canadian authors — seven for English writing and seven for French writing — and each comes with a $25,000 prize.

Henstra will formally receive her award on November 28, 2018 at a ceremony hosted by Governor General Julie Payette at Rideau Hall in Ottawa.