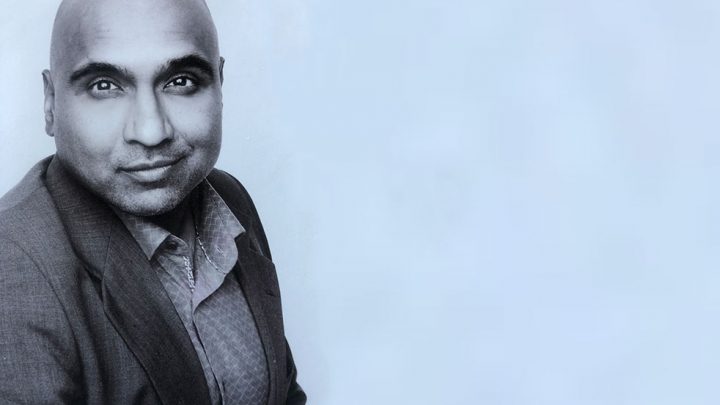 Prav Pillay has had a contemplative, reflective personality for as long as he can remember. As a child, he often skipped out of day camp to bike to the library (after a pit stop at the local Becker’s for a pack of licorice). He quips that part of the library’s allure was that it was air conditioned, but, really, he spent entire days there as a nine-year-old because he was fascinated by information and exploring the unknown.

It’s no wonder, then, that a person of such a curious disposition was eventually caught up in the gravitational pull of McMaster University’s Arts & Science Program. And while he says now that it was a perfect match for him, the 1987 grad admits that he almost ended up on a very different path.

“It was totally happenstance that I ended up in the Arts & Science Program,” says Pillay, explaining that he originally intended to pursue a degree in engineering. But a failed algebra exam in Grade 13 took a toll on his confidence, so he changed gears and instead applied to the Faculty of Arts & Science at three different universities — or so he thought.

“When I got the admissions packages in the mail, I was shocked to see that Arts & Science at McMaster wasn’t a Faculty at all — it was a Program, and I was so intrigued by that,” he recalls. “I looked at the materials that they sent, and this thing happened inside of me — I thought, ‘wow, I can actually pursue my love for science and I can explore these great writers and philosophers?’ In that moment, I knew I had to enroll — it was the only place I wanted to be.”

So, Pillay and his parents came to McMaster to speak with Dr. Herb Jenkins, the Arts & Science Program Director at the time. The Program was still very new back then — only in its second year of existence — so his parents rightfully wanted to learn more about it. Pillay says it was a captivating conversation, and he vividly recalls how Dr. Jenkins looked his parents in the eye and told them, “your son is going to fundamentally change here, and I encourage you to allow it to happen.”

“Kudos to them,” he says. “Because they did exactly that.”

Coming into the Program was a seamless transition for him. Sliding into a community of likeminded people allowed him to flourish as a student, grow as an individual, and make lifelong connections. He excelled in his coursework, participated in social events, and even became the first President of the Society of Arts & Science Students (SASS).

“Discovering these peers who had the same depth of curiosity as me, it was like coming to a family,” he explains. “It was the first time in my life that I didn’t feel like an outsider — I felt like I could show all of my dimensions. I was able to be my full self and develop my full self — that’s what is so compelling about the Program.”

After graduating from Arts & Science with a focus in biochemistry, Pillay realized that he wasn’t interested in pursuing a life in a lab. Fortunately for him, happenstance swooped in again and nudged him onto his next path.

His roommate at the time had recently completed the Graduate Management Admission Test (GMAT), and still had his study materials lying around the house. Pillay thought, ‘why not?’, and dove right in. A few years later, he earned an MBA from McGill University.

“I was ready to take everything I learned in Artsci and apply it to the world, but I needed a way to get myself in the door,” he says. “An MBA was the way.”

Around this time, Pillay had his sights set on an executive office at Exxon — a goal that he achieved in 1989, at their Imperial Oil headquarters in Toronto. But he wasn’t keen on becoming an oil industry tycoon. Moved by conversations he had with David Suzuki at McMaster about the limitless potential of Arts & Science students — Pillay recalls him telling Artsci students that they were going to make a huge difference in the world someday — he wanted to go into Exxon and subvert their practice for the better.

“The whole point of going there was to make a change,” he says. “I had encountered some research during my undergrad that indicated that both our planet and our species were going to be in big trouble by around 2015. So, I wanted to bring in some intervention strategy.”

While they liked him a lot and moved him quickly along the senior management executive track, Pillay  discovered how difficult it was to shift a corporate culture that was oriented around extraction, so they eventually went their separate ways.

With some money in the bank, he stepped away from it all for a year. He road-tripped across North America, back-packed through Africa, and eventually reunited with some high school pals in a place on Queen Street in Toronto. During this time, he returned to his old Artsci course materials and re-read every book prescribed by the Program.

“The hustle of university can compress you a little bit,” he says. “This time, I was free to take my time and I just let it all sink in. It was such a gift to have all of those ideas seeded in such an elegant way and to navigate them as part of a community, but to come back to them later in life and really digest and acknowledge the legacy of the messaging was empowering.”

Pillay took that rekindled empowerment back to the workforce later that year, when he was recruited by the newly established Canadian branch of Doctors Without Borders to be their Director of Organizational, Fund, and PR Development. Pillay notes that Doctors Without Borders was struggling to take off in Canada despite its success internationally, so taking the job was a bit of a career risk — but one that was ultimately rewarding. Three years later, he parlayed his experience with the humanitarian giant into a job with the federal government, where he worked as a Special Projects Director for Youth Services Canada.

His work in these two roles connected him closely with First Nations communities around the country — something he describes as extremely fulfilling. As such, in the mid-90s, he transplanted his life to the west coast, taking on the role of Executive Director of the Rediscovery International Foundation, where his primary mission was to help establish working relationships with Indigenous communities throughout BC.

Feeling inspired by his work, Pillay returned to a childhood interest and began to create art. In his mid-30s, on a creative impulse, he attended a portfolio day at the Emily Carr University of Art and Design in Vancouver to show off his work.

“They asked me, ‘you do know how old the students in our program are, right?’ But I had no idea,” he recalls. “They told me that most students were in their early-20s and asked if I still wanted to come, despite my age. I said, ‘yeah, of course,’ and they waived all entrance requirements for me.”

Pillay would spend the next five years of his life studying at Emily Carr, and the two years following that at the University of Saskatchewan, where he earned an MFA in Visual and Media Arts.

“I’ve had the great fortune of following my instincts,” he says. “Art was a calling. It just took time for me to gather the courage and get to a place where I could actually answer that call.”

Now standing at the intersection of business and art, Pillay’s qualifications allow him to live an incredibly fluid lifestyle. As a result, he has since spent time working as an arts prof at Emily Carr, a business manager at a coffee company, an independent artist, and a business consultant.

“I consider myself an edge-dweller,” he says. “I move between communities, and rarely stay for long. In First Nation culture, I suppose I would be considered coyote or raven — a trickster. I take information from one community or one discipline and bring it to another. I really believe that the transplanting of ideas is so important.”

This nomadic way of life eventually led him to Salt Spring Island, where he currently resides. He calls it his “little paradise” and says that he feels more at home than ever before — his children, their mother, and his own parents all also dwell on the small island — and, there, he’s doing some of the most rewarding work of his career.

As Founding Partner and Managing Director of Humanitas Capital Management, which recently launched its “Smart Planet Fund,” Pillay is demonstrating how, when developed with a traditional indigenous awareness of the world, technologies of the Fourth Industrial Revolution are able to cultivate coherence between human wellbeing, ecological integrity, and economic prosperity.

“The Smart Planet Fund exists to invest in technologies that will enable humanity to adapt to the ever-increasing volatility of the environment, while preserving or deepening human dignity,” he explains.

“There is going to be a great deal of change coming,” he forecasts. “To use all my experience working across disciplines and sectors towards enabling humanity to better navigate this time of deep transition is really fulfilling.”

Reflecting on his career, Pillay understands that he has taken a very unique path. While he knows not everyone can drop what they’re doing to pursue a Fine Arts degree in their mid-30s, he does see great value in always chasing satisfaction — a message he hopes current students are receiving.

“I would tell them to find the silence within oneself, to understand the depth of one’s own being, and to work from within that place,” he says. “Be present in that place. Be inspired. Let the callings emerge, and then follow them without fear.”