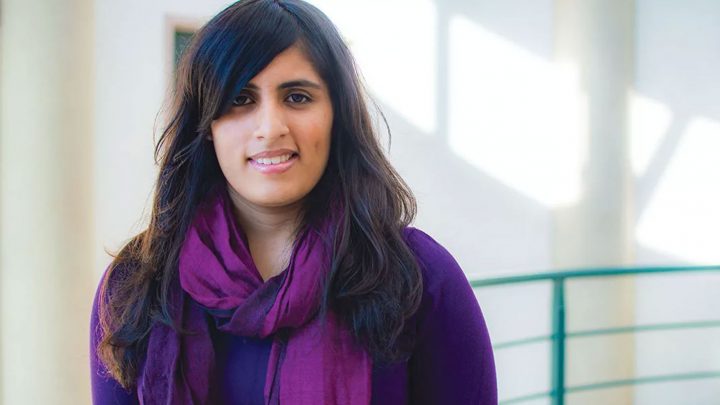 It doesn’t get much more “Artsci” than working on a Master’s in accounting while also writing a novel, so it’s no surprise that that’s exactly how Sunanna Bhasin has spent the past year of her life.

The 2017 Arts & Science grad filled the rare gaps in her busy academic schedule by converting her undergraduate thesis into her debut novel, Underpass. Published this past October, the book was a large undertaking for the first-time author but a story that she felt determined to tell.

Loosely inspired by her own life, Bhasin says that Underpass tells the story of Indian-born parents raising a Canadian-born daughter in Canada. Their different upbringings create conflicting values among the family members, which come to a head as the daughter approaches her university graduation and prepares to begin a life much different from that of her parents. The story touches on tragedy, societal pressures, the unbreakable bond of family, and the power of love.

“I would say it’s a bittersweet story,” Bhasin says. “I wanted it to mirror reality in such a way that readers are able to understand that it takes a lot of effort to really comprehend people and their actions and that we shouldn’t give up on them when things get difficult.”

Bhasin goes on to say that she hopes readers are able to see themselves in the characters, and are able to grow as sisters, brothers, mothers, or fathers simply by experiencing the events that take place in the book.

The book itself was almost a classic case of the what-could-have-beens. Sitting on the concept for several years, Bhasin says it was her undergrad studies at McMaster that really pulled the story out of her.

“Without the Arts & Science Program, I can’t say if this book would ever have come to exist,” Bhasin says. “It was the Program’s flexible thesis course and the phenomenal supervisor I found in Dr. James King of McMaster’s Department of English and Cultural Studies that resulted in me taking on the project that would later become Underpass.”

Bhasin says that, knowingly or not, Artsci Program Director Dr. Jean Wilson was instrumental in the publication of her debut novel — so much so that she’s thanked personally in the acknowledgements.

“Many of the things that inspired me to pursue writing this book all started in Dr. Wilson’s incredible Literature course,” Bhasin says. “I remember, while studying Dante’s Inferno, discussing the idea that sometimes we have to go through a figurative Hell in order to truly find ourselves. That really stuck with me.”

The concept of overcoming a “figurative Hell” hit home for Bhasin because, at the time, she says she was going through some struggles of her own. Pursuing a combined honours degree in Arts & Science and Biology and not at all enjoying the biology side of things, she was wrestling with the decision to either persist or reassess her plans. Inspired by her reading of Dante, Bhasin ultimately dropped her biology combination and shifted her focus entirely to Artsci.

This decision allowed her to sink her teeth into Artsci’s Research and Creative Writing inquiry course a year later. Taught by Anton Piatigorsky, Bhasin says that this class also played a pivotal role in her development as a writer. Having discovered her passions and made the decision to pursue them, she says Piatigorsky who helped her hone her skills.

“He had me writing things that I didn’t even know I was capable of,” she says. “His Research and Creative Writing course pushed me outside of my comfort zone, challenged me to write under a time constraint, and encouraged me to regularly share my work with my peers.”

Asked if Underpass is a scratched-off bucket-list item or a sign of things to come, Bhasin quickly says “both.” She’s satisfied simply having the story out in the world, but is also hoping to seize the momentum created by its publication. She’s already got other ideas and is considering venturing into different genres, such as thrillers or romance, but doesn’t expect to have her sophomore novel completed until she’s completed her Master’s degree.

Underpass is available on Amazon.com.

—
Photo by Yasmeen Alkoka, The Medium