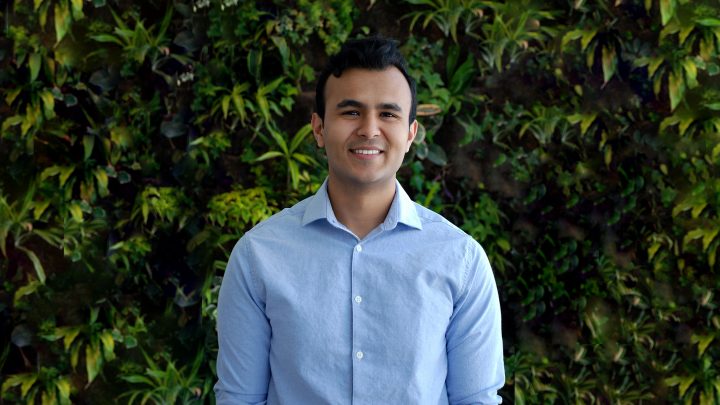 This past summer, 2016 Arts & Science graduate Saad Syed made headlines for being one of 11 McMaster University researchers to receive a Vanier Canada Graduate Scholarship, the Government of Canada’s most prestigious grant for doctoral students and postdoctoral researchers.

Named after former Governor General Georges Vanier, the scholarship recognizes outstanding doctoral students and provides them with $50,000 of annual research funding for up to three years.

Now an MD/PhD student working out of the laboratory of Dr. Michael Surette in McMaster’s Department of Biochemistry and Biomedical Sciences, Syed says that being chosen by the scholarship’s selection committee is a huge vote of confidence for him as an early-career researcher.

“The first thing that the scholarship does is provide me with financial stability, which might seem obvious, but that’s a big concern for researchers at this stage of their career,” he explains. “Bigger picture, it gives me peace of mind and reassurance that I’m on the right track with things — that my work is meaningful and worthwhile.”

Vanier Scholarships are distributed annually to doctoral students and researchers who display academic excellence, research potential, and leadership ability. While Syed oozes all three, he modestly believes that he was selected because of his ability to work across several disciplines — something he attributes heavily to his time in the Arts & Science Program.

“I think being chosen for this has a lot to do with where research is going,” he says. “The importance of interdisciplinary work is really showing in today’s research landscape, and my study spans several disciplines.”

His study, which he admits is still in its infancy, is analyzing the impact of food production compounds on metabolic health. This means he’s collaborating with experts in fields such as microbiology, metabolism, and environmental health research. Together, the diverse research group is examining the trace amounts of agricultural and nutritional compounds found in food and testing how they impact the microbiome. In particular, Syed and his colleagues are looking to see how these compounds — plastics, pesticides, etc. — interact with the bacteria in the human body to see how they impact metabolic diseases such as obesity, diabetes, and non-alcoholic fatty liver disease.

Syed says that it’s difficult to forecast outcomes for his research, but he does believe that it has public policy-changing potential.

“Nobody has ever really looked at food compounds from this perspective,” he says. “So, depending on what we discover, it may play a role in new agricultural and food production regulations.”

Now almost three years removed from his graduation from the Arts & Science Program, Syed hasn’t forgotten about the importance of his undergraduate studies. In fact, he believes that his time as an Artsci is the reason for the successes he’s achieved so far in his still-young research career.

“The Arts & Science Undergraduate Student Research Awards (USRA) were my foot in the door as far as research is concerned,” he says. “Without them, I have a hard time believing I’d be doing what I am today.”

Syed also believes that the unique structure of the Arts & Science Program has allowed him to carve the path that he’s currently on.

“Artsci not only gives you a ton of opportunity, but a sense of community that you take with you even after you graduate” he says. “The people I brainstorm with today, the people who edit my work — they’re all Artsci grads. They bring to the table diverse, differing opinions that you simply would not get from more streamlined programs.”

Speaking of Artsci grads, Syed is now the third one to be awarded a Vanier Scholarship, joining an exclusive group previously only occupied by Kate Mulligan (2001 grad), who was part of the first Vanier cohort back in 2009, and Michael Skinnider (2015 grad), who won in 2017.

Skinnider played an instrumental role in Syed’s successful application, advising him throughout the submission process, and Mulligan says Syed should expect this award to significantly impact the trajectory of his career.

“Today, I still embrace the Vanier ethic of combining scholarship with leaderful service,” says Mulligan, who now works as an Assistant Professor of Social and Behavioural Health Sciences at the University of Toronto and serves as the Director of Policy & Communications for the Alliance for Healthier Communities. “Being a Vanier scholar showed me that there was a community of leaders, scholars, and givers who had confidence in me. That, in turn, gave me confidence. The Vanier community also opened up opportunities for me through international conferences, media, and professional relationships.”

And that is something Syed can look forward to, too.