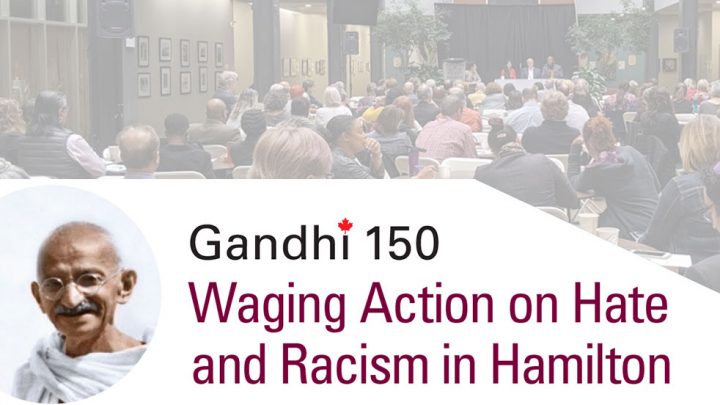 In early October, hundreds of forward-thinking community members descended on the McMaster Innovation Park to participate in the Gandhi 150 Conference, “Waging Action on Hate and Racism.” Inspired by the Gandhian values of nonviolence, well-being of all, and soul force, the conference was designed as a response to the growing levels of hate in Hamilton, in Canada, and throughout the world.

The student recorders joined different working groups that discussed various methods for tackling hate in Hamilton and documented the ideas born from these discussions. At the day’s end, one recorder, Level-II student Elle Klassen, presented her group’s concepts to the conference — an experience she won’t soon forget.

“The experience was eye-opening,” she says. “It exposed me to jarring local manifestations of hatred and racism in exactly the way I had hoped it would when I first applied for the position of recorder. As a new member of the Hamilton community, I felt included in an important discussion about local mobilization for equality and for a healthier society.”

The other recorders, Katya Korol-O’Dwyer, Justine Becker, and Katerina Simantirakis, all echoed Klassen’s assessment of the event’s significance. Each took something different away from their participation.

“For me, this conference was important not only because it raised awareness of both implicit and explicit manifestations of hate in our society, but also because it was action-based and focussed on tangible things that we can do on multiple levels to counter actions of hate and violence,” Korol-O’Dwyer says.

“In today’s political climate, where racially-charged hate crimes are on the rise, action-oriented conferences like this are an invaluable way to invigorate the struggle for justice and peace here in Hamilton,” adds Becker. “This conference was an amazing learning opportunity for me to hear about these issues from the perspectives of experts from the Hamilton community.”

“My biggest takeaway from the conference was that, in order to prevent discrimination, an important first step is naming the problem,” Simantirakis explains. “A lot of the dialogue around discrimination is centred around minimizing or invalidating how serious an issue it is. It is difficult to address an issue when it can hide in ambiguity, so it is important to keep this idea in mind when considering how we start dialogue and consider changes in our community.”

Dr. Warner says the four Arts & Science students played an invaluable role as recorders, noting that their ability to distill and document a day’s worth of discussion will ultimately become the foundation for the strategic plan that comes from the conference.

As chair, Dr. Warner played a major role  in planning much of the event’s programming. This included conceptualizing the format, helping with fundraising, and personally recruiting all of the speakers. He says that each participant brought something unique to the event and that every speaker came equipped with plenty of relevant experience and insight.

“The idea was to bring in people with decades of different experience and expertise in dealing with issues of hate, human rights, and racism,” says Dr. Warner, who has been involved with the Gandhi Peace Festival for nearly 30 years. “We wanted everybody in attendance to be inspired to action by people who were extremely well informed.”

Speakers at the event included representatives from the Ontario Tech University’s Centre on Hate, Bias and Extremism, the Canadian Anti-Hate Network, the Noor Cultural Centre, the City of Toronto, the City of Hamilton, Good Shepherd, and Econometric Research Ltd.

“The speakers came from diverse backgrounds and spoke to the unique manifestations of Black racism, Muslim racism, Indigenous racism, and gendered violence,” Korol-O’Dwyer says. “Something that resonated with me was that, while the speakers highlighted that diverse groups face different expressions of hate and thus require specialized responses, they simultaneously situated these distinct manifestations as coming from the common place of hate.”

Korol-O’Dwyer was particularly moved by comments made by Azeezah Kanji, Director of Programming at the Noor Cultural Centre, who explained that “racism is not a passive absence, but rather an active propagation of knowledge.”

“That quote makes a key theme of the conference clear: that each and every one of us is accountable for the propagation of hate and racism and that, no matter the target, acts of violence and hate are everyone’s issue,” Korol-O’Dwyer says. “I think that these ideas will influence me in the way that I conceptualize and interact with instances of hate and racism in the future.”

Dr. Warner has received nothing but extremely positive feedback about the event. However, he concedes that there’s still much work to be done.

“I could tell from the atmosphere inside the room that people really felt that this was an important conference,” Dr. Warner says. “But this was all only stage one. We still have to work toward stage two, which is way more important. We have to say, ‘okay, we’ve got together, we’ve spoken about the problems, and we’ve developed some actions — now let’s get those actions out into the community.’”