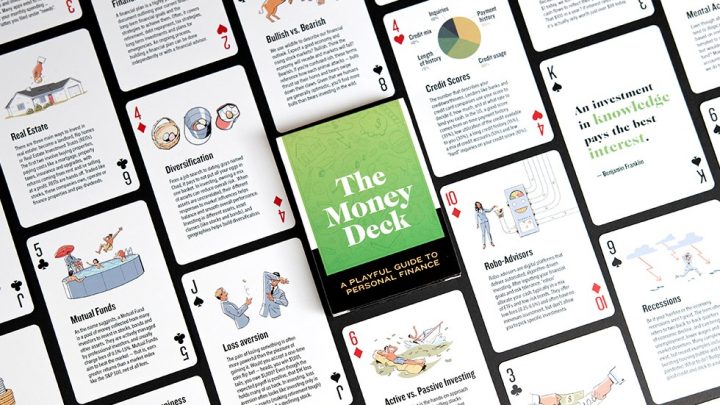 The Money Deck is a deck of playing cards containing a primer on personal finance. It covers saving, investing, retirement, home ownership, the economy, common money mistakes, and more. Each card covers one key aspect of personal finance, and includes a playful illustration. The deck, funded on Kickstarter (https://www.kickstarter.com/projects/benbf/moneydeck), is meant to make this important information accessible to a broad audience who might not have been previously exposed to this content, or felt comfortable educating themselves about it.

To create this deck, Ben Barrett-Forrest (Class of 2014) partnered with his longtime friend Nicholas Fleming, who recently graduated with an MBA from Harvard Business School. The illustrations were done by Jori Bolton, a Hamilton-based illustrator who Ben connected with during his time as an Assistant Art Director at the Globe and Mail in Toronto. The Money Deck and all previous decks have been copy-edited and proof-read by fellow Artsci grad David Laing (Class of 2014).

Ben’s first deck of educational playing cards – The Design Deck – was completed as part of his Artsci/Multimedia thesis in 2014. He decided to see what would happen if he put the product up on Kickstarter, and a month later it had raised over $28,000. Since then, Ben has released the Design, Font, Weed, and Beer Decks, which have sold over 12,000 copies in total and been shipped to over 90 different countries. The decks are sold in museums, art galleries and shops all around the world, and are used as curriculum aids in colleges in the US, UK, and Australia. Ben has plans to release dozens more education decks, and is currently starting up a learning design company called Knowhow Studio.

The Artsci classes that Ben drew from most for this deck are ARTSSCI 1B03 / Writing and ARTSSCI 2E03 / Economics. Each card in the deck is essentially a précis—which Ben had a lot of practice doing in Writing class—of a personal finance subject. And the broad economic overview provided in Econ class was helpful when figuring out the subjects to cover in the deck.

The purpose of The Money Deck is to make personal finance knowledge more accessible to a diverse audience. Right now, the subject is mostly relegated to dense textbooks and lengthy YouTube videos, but Ben wanted to present the information in a playful and approachable way. But the accuracy and reliability of the deck is also crucial, as this information can have a large impact on someone’s financial situation. The partnership with Nicholas Fleming has brought the legitimacy and accuracy required, and Nicholas had the content vetted by several of his financial expert colleagues. In Ben and Nicholas’ conversations with friends and colleagues, they gathered that many people know they should be more educated about personal finance, but the topic feels too intimidating or boring for them to improve their knowledge. The Money Deck exists to change this, and lower the barrier of entry to personal finance knowledge. One of the largest challenges in creating the Money Deck was editing down a vast amount of potential content to 56 concepts that could be contained in a few sentences on a playing card. There were 35 iterations of the written copy before the final version was completed.

Ben has spent the past 2.5 years living in Victoria, BC, working as a magazine designer and running his own graphic design business.