Artsci Students Get Hands-On Learning in the Hamilton Harbour 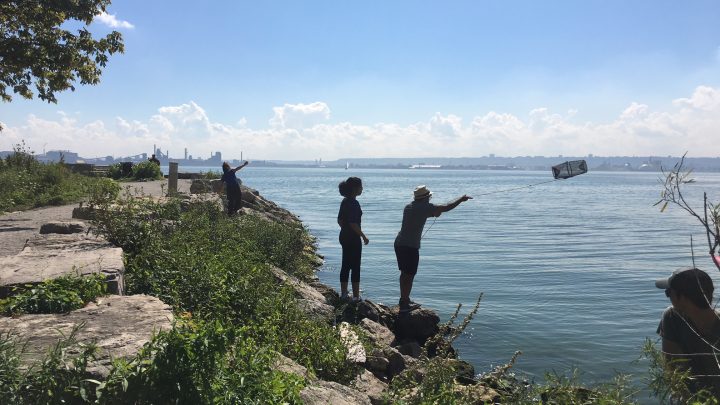 They may be small, only about six inches long, but they’re having a big impact.

Since the early ’90s, the round goby, a fish species native to the Black and Caspian seas, has been invading waterways and threatening aquatic species throughout the Great Lakes, including Hamilton Harbour.

It’s a species that thrives in rocky habitats and, as the City of Hamilton adds riprap — large boulders meant to restore the local shoreline left damaged by severe climate change-related weather events in recent years – there are concerns that the goby population will nest and flourish among these rocks, compromising native fish species.

This fall, a group of Integrated Science (iSci), Life Sciences, and Arts & Science students set out to gather data and learn first-hand just how the addition of riprap is impacting round goby success and the success of other fish species in Hamilton Harbour.

It was all part of ISCI/ARTSSCI 3IE1 – Mischief in the Harbour, a two-day experiential learning course developed by McMaster’s Erin Leonard, a post-doctoral student in Biology and an instructor in the School of Interdisciplinary Science.

“I thought this would be a great opportunity for students to learn more about the impact of the round goby and to connect that learning to something that’s happening in the community,” says Leonard, who worked collaboratively with the City of Hamilton, CityLab Hamilton, and the Bay Area Restoration Council (BARC) to develop the course.

“The City is thinking of adding more riprap along the shore to protect things like property, pipelines, and beaches for kids to play on,” explains Leonard. “So, City staff were interested in working with us to understand if riprap is drastically changing ecosystems and if it is, how can we facilitate the native species’ success?”

Over the course of a weekend, Leonard and her students visited three sites throughout Hamilton Harbour including, Cherry Beach, where riprap was added last year; Confederation Park, which has not been riprapped; and LaSalle Park, where the round goby is already flourishing.

With the help of graduate students and equipment from McMaster researcher Sigal Balshine’s Aquatic Behaviour Ecology Lab, students in the course set up nets to catch fish at each site, counting how many of each species were present and measuring the length of the fish to determine their age. Students also learned how to identify different fish species and even performed dissections to learn more about the round goby’s unique anatomy and physiology.

“I wanted to fit in as much applied research as possible,” explains Leonard. “That actual field experience is so critical to building the transferable skills essential for employability and transition to the workforce.”

Using background materials provided by staff at the City of Hamilton and BARC, students also learned about the legacy of contamination in Hamilton Harbour, and discussed the process behind the City’s decision to install riprap along some areas of shoreline. As well, they learned about the City’s Our Future Hamilton vision – particularly the goals related to environmental sustainability.

Students even took part in a beach clean-up as part of International Coastal Clean-Up Day after noticing plastic debris strewn across the shoreline at Confederation Park.

“Students found the whole experience really valuable,” says Leonard. “They liked being able to work hands-on with the fish and learn about what’s been happening in Hamilton Harbour over the past 16 to 20 years. Also, it was interesting for them to see how what they’re learning fits into the ‘clean and green’ goals of Our Future Hamilton – making those connections made it real for the students.”

Pascale Bider, a fourth-year iSci student who took the course because of her interest in invasive species ecology and ecosystem conservation agrees. “I liked the idea of taking the skills I’m learning in class and applying them to a real-world problem,” she says.

“I loved the hands-on aspect and the non-traditional teaching method, which I found very effective for learning field techniques such as setting minnow traps, identifying and measuring fish and performing dissections,” Bider continues. “Also, through this course I got to learn about the ecological problems Hamilton Harbour is facing as a result of human activity and climate change.”

Leonard developed ISCI/ARTSSCI 3IE1 – Mischief in the Harbour after connecting with Patrick Byrne, project manager at CityLab Hamilton – an innovation hub that matches faculty from Hamilton’s post-secondary institutions with staff at the City of Hamilton to address key issues facing the community. It was Byrne that put her in touch with staff at the City and at BARC.

Leonard says the data gathered by the students shows that, so far, the riprap doesn’t seem to be aiding in the success of the invasive round goby, however, only 4% of the fish caught were native species including  log perch and rock bass. “This is obviously very preliminary data and monitoring would have to be continued over a number of years,” she adds.

Leonard says, in the future, she hopes to expand the course and run it throughout the year, providing more hands-on opportunities for students.

“The next step is to look at ways to help the native communities of fish succeed by doing things like building nesting sites for these species which could help them flourish and be really helpful in deterring the gobies – that could be a follow-up course,” she says.

ISCI/ARTSSCI 3IE1 – Mischief in the Harbour was developed with funding from an Experiential Learning in Academic Programming (ELAP) grant awarded through the Paul R. MacPherson Institute for Leadership, Innovation and Excellence in Teaching.