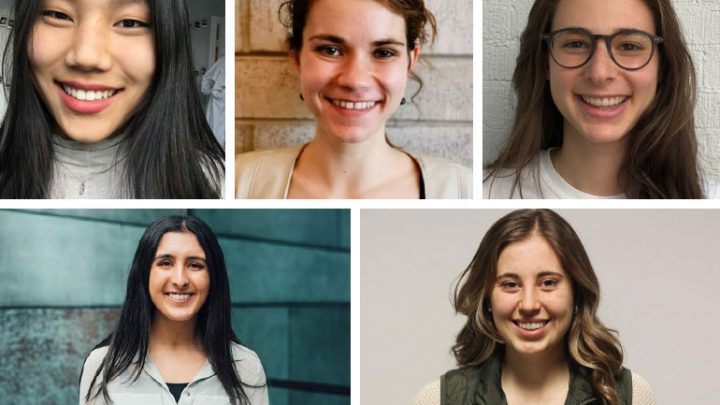 Every summer, students from the Arts & Science Program go their separate ways. Many work at summer jobs and/or take a course or two, while some from out of town return home to recharge with friends and family, and a few travel the world. But six especially lucky ones spend their summers doing something entirely unique — they take on a fully funded research project through the McMaster University Undergraduate Student Research Awards (USRA).

Designed to cultivate research partnerships between undergraduate students and faculty members, the USRAs provide grants to budding researchers so they can pursue a 15-week study over the summer term.

In total, six USRAs are made available to students in the Arts & Science Program every year, each one worth $7,500. More than just meaningful summer employment, though, the USRAs give students an intimate introduction to high-level research, often functioning as a gateway to larger research exploits.

For example, 2014 recipient Saad Syed went on to win a prestigious Vanier Scholarship for his analysis of the impact of food production compounds on metabolic health. Matthew Jordan, another 2014 recipient and an eventual Rhodes Scholar, has conducted a series of research projects at Oxford University and NYU. The list goes on.

Already, members of this year’s cohort of USRA recipients are feeling inspired to take on more research in the years ahead.

“The USRAs have helped me develop tools that translate my curiosity into meaningful analysis,” says Level III Artsci student Hannah Feldman, whose study examines the intersection between parenting chat groups and gender. “This project has sparked an interest in pursuing future research — especially in the social sciences. I have seen the value of self-directed learning and felt the excitement that comes from exploratory research.”

Fellow Level III Artsci student Maanvi Dhillon, whose USRA allowed her to explore the value and consequences of electoral reform at the local level, shares the same sentiment about the self-directed nature of these projects.

“There are many crucial skills that you can only develop by having the kind of independence and control that opportunities like the USRA provide students,” she explains.

To qualify for a USRA, Artsci students must be enrolled full-time in the Program, be eligible to work in Canada, and have a CGPA and Fall/Winter average of at least 8.0.

The application process itself is straightforward — all you need is a short description of your research idea, a brief outline of your proposal, and an enlisted faculty supervisor. Yet, in many cases, students still shy away from applying despite having significant interest in the USRAs. Until recently, Jessica Gut was one of those students.

Gut, a Level IV Arts & Science student, says she had pondered applying for a USRA since the early years of her undergrad, but uncertainties about her research capacity and the quality of her idea held her back. With the clarity of hindsight, however, she says that she would strongly encourage any student on the fence to hop off and apply.

“Looking back, I realize now that you don’t need to have past experience or a fully fleshed-out idea in order to apply,” she says. “You have four months with the support of a supervisor to develop your skills and thoughts.”

Gut, who used her USRA to study how literary works can inform our understanding of the shifting urban fabric in Hamilton, collaborated with the Hamilton Public Library to develop a publicly accessible digital map of the novels, poems, and other creative writings that are situated in the city.

“This experience has been a great way to learn how to plan, organize, and see a major project through,” she says, “It has prepared me for my thesis this year.”

One of the greatest advantages of the USRAs, most recipients will tell you, is having unbridled access to a faculty member. Level IV Artsci student Anna Lindsay-Mosher, who worked with Dr. Reza Samavi to create a semantic structure of police reports as a means of mitigating police violence, says working on such a large-scale project would be difficult without the feedback and assistance of her supervisor.

“Being able to work one-on-one with a faculty member allowed me to explore new concepts and have new experiences,” she says.

Myfannwy Pope, a recent grad, believes that while most undergraduate students would surely benefit from participating in the USRAs, it is Arts & Science students who thrive the most.

“I think for Arts & Science students in particular, who tend to have an overwhelming diversity of interests, the USRAs are an opportunity to explore topics of interest outside of what is currently offered in-program,” says Pope, who completed a USRA project about mainstream print media discourse around First Nations interests. “Furthermore, as the USRA format is basically an extension of the inquiry-based learning model, Artscis are well prepared to take on this form of work.”

Following the 15-week research window, more than 50 USRA recipients from across McMaster will gather on campus to present their findings at a formal poster session — a day that Level IV Artsci student Lily Martin says she’s really looking forward to.

“I am thrilled to share my work with fellow USRA recipients and members of the McMaster community, and I look forward hearing their thoughts regarding my research project, which investigates human suicide through an evolutionary biology lens,” she says. “I am also excited to learn about the work of my peers and hear about their accomplishments and challenges in conducting research.”

—
This year’s USRA poster session will be held on Tuesday 5 Nov. from 2-4pm in CIBC Hall. It is an open house event — anyone reading this story is encouraged to stop by and learn more about Arts & Science student research. Students considering applying for a USRA must do so by the 21 Feb. 2020 deadline. For more information, click here.