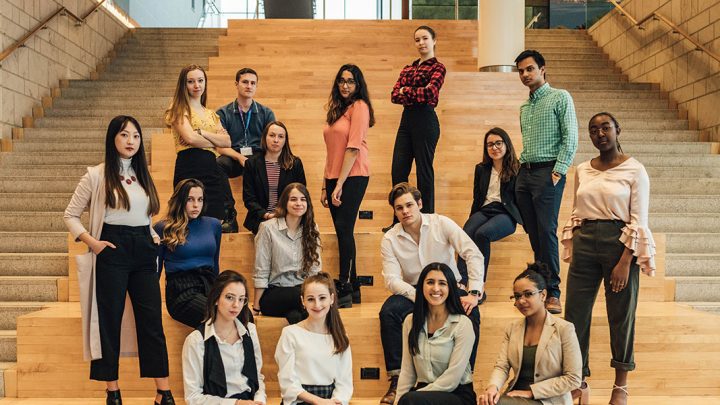 Scary. Exciting. Unpredictable. Evolving. Rewarding. Those are just some of the words that graduates of McMaster’s Arts & Science Program used to describe the modern employment landscape at the second annual New World of Work Forum.

Held on Saturday 2 March 2019 at the David Braley Health Sciences Centre in downtown Hamilton, this exciting forum is designed to help Artsci students gain exposure to the dynamic world of work through the perspective of Program grads.

Through keynote speeches, practical workshops, captivating panel sessions, and valuable networking opportunities, 17 different alumni spanning more than 30 different graduating classes were on hand to help prepare current students for their next steps using examples from their own personal experiences.

Bruce Miyashita, a 1984 Arts & Science grad and the generous donor whose financial support funded the forum, says events like New World of Work are exactly what he envisioned when he established the Tom & Nancy Miyashita Arts & Science Program Enrichment Fund back in 2017, in honour of his late parents.

“I have been very fortunate in my business career, and I really feel that’s almost entirely due to the start I got here in the Arts & Science Program,” Miyashita says. “Although I went on to get an MBA, the most important things that I learned about business actually came from being an Artsci student. So I’m very happy that this is how the Program has used my gift — I hope the students taking part will learn some of the same things I did all those years ago.”

Comprised this year of Luiza Araujo (Level III), Sarah Brooks (Level III), Maanvi Dhillon (Level II), and Michelle Zilbergerts (Level III), the team was charged with planning and executing the entire event from the ground up. 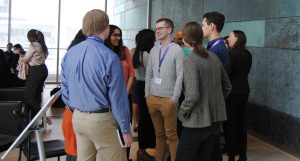 Despite it being the second New World of Work Forum, the Student Project Management Team wanted to start with a clean slate. So, their first order of business was to figure out what their fellow students actually wanted to gain from attending the event. The group surveyed students in the Program and discovered two common denominators: they wanted to develop their professionalism and they wanted to sharpen their ability to communicate the value of being an Arts & Science graduate.

“Using the feedback from our surveys, we were able to determine the types of speakers we’d like to invite and the types of workshops we’d like to put on,” says Zilbergerts. “Prav Pillay and Vass Bednar, our keynotes, are great examples of what it means to be an Artsci. I think the students will have gained a lot from hearing them talk.”

Pillay, who graduated from the Program in 1987, travelled over 4,300 kilometres to take part in the event. Flying into Hamilton from an island off the coast of BC, Pillay says that simply having an opportunity to “pay it forward” was all it took to rouse him into coming.

“I have received excellent mentorship throughout my life, and I felt that coming here was a chance for me to pay that forward by providing similar mentorship to students in the Program,” says Pillay, who founded and manages Humanitas Capital Management. “On top of that, I remember being an Artsci student all those years ago, truly having no concept of how important it was or how much of an advantage I had. I want to help the current students better grasp how consequential this unique education can be.”

Bednar, a 2008 Artsci grad, says that she was more inclined to participate so that current students could have a realistic understanding of the sometimes-harsh realities of the employment world.

Having spent time as a public policy advisor for companies such as Airbnb and Delphia, as well as for Ontario’s Ministry of Education, she spoke to the more than 75 Artsci students in attendance about contract work, changing demographics, and the importance of ‘soft skills,’ such as communication, critical thinking, and flexibility. 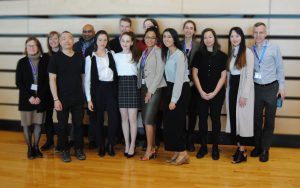 “The Arts and Science education is so unique and broad that students can’t rely on traditional job paths when they consider what could be next,” Bednar explains. “The Program also endows students with a constant curiosity, which can make it difficult to narrow options. I wanted to participate in this event to discuss my work chairing a federal panel on the Canadian labour market for young people and apply our findings to the challenges that students are directly experiencing.”

“Prav and Vass are fantastic,” says Miyashita, who has held executive positions at BMO Financial Group, Maple Leaf Foods, and Bombardier Inc. “They’re a reminder of how awesome the roster of Artsci alumni is. I am very impressed with them and I’m equally amazed by the current group of students. I honestly don’t think I’d get accepted today.” 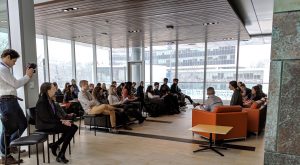 As proud as he is to have helped create something as important as the New World of Work Forum, Miyashita says he’s even more so in awe of the happenstance of it all.

Way back in the 80s, unsure of what he wanted to study in school, he and his mother went to the registrar at Mac for advice. He told the woman working there that day about some of the subjects he liked, some of the subjects he didn’t, what he was good at, what he wasn’t, and what he wanted to get better at. She told him about a brand-new program heading into its inaugural year that bridged the arts and the sciences and encouraged him to give it a chance.

Before he knew it, he and his mother were engrossed in a captivating conversation with Dr. Jenkins, learning all about his big plans for the Arts & Science Program. The rest, as they say, is history.

“It was a real fluke that I ever stumbled upon Artsci,” he says. “I wish I could go back in time and tell that woman at the registrar’s office how much she changed my life. That little thing she did, suggesting the Arts & Science Program to me, has had such a huge impact on me and is still indirectly impacting McMaster students today, almost 40 years later. In a way, she’s the reason we’re all here together at the New World of Work Forum.”