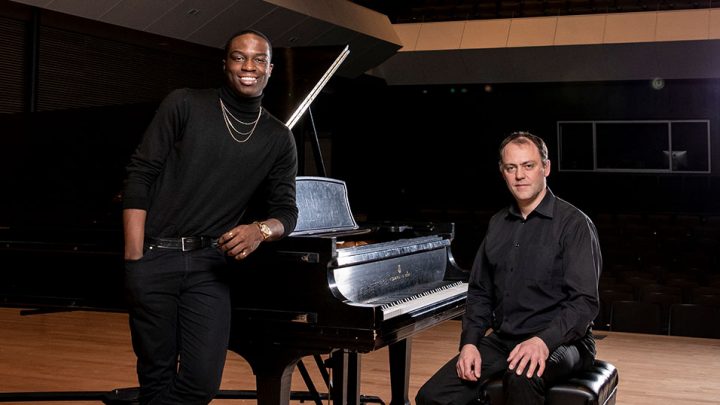 He was in his second year of McMaster’s Arts & Science Program, majoring in biology and unsure of his career direction. “I was an intellectually curious guy but couldn’t really focus,” says Alexander Cann a 1996 Artsci grad. “Then, music came along.”

Already an accomplished pianist at 19, Cann was asked to be musical director for a campus production of Sondheim’s A Little Night Music. That was so much fun, he musical-directed two more shows. He apprenticed with conductor Philip Sarabura and the McMaster University Choir. He completed two degrees in music from McGill, where he was chosen to study choral conducting with Julian Wachner. He founded a women’s choir and held positions at the Shaw Festival and Tapestry Opera.

“One experience led to another,” recalls Cann, now in his 10th season as artistic director of the Bach Elgar Choir, Hamilton’s renowned concert choir. He looks back on that seminal moment in his second year at Mac. “At the time, I thought, ‘That sounds kind of fun.’ I didn’t realize it would completely alter my professional existence!”

In April 2018, Pascal Adesina was finishing his first year at Mac and preparing to enter the Justice, Political Philosophy and Law program in September. He had been singing in the McMaster Gospel Choir, and they were looking for a new conductor in the fall.

“I was pretty much voluntold,” says Adesina with a smile. “But they knew part of me wanted to do it.” He acknowledges that the “slight tugging” of music had been getting stronger in recent years.

It’s easy to see why. Adesina started learning piano at five and guitar at eight, followed by six years of formal lessons. At 11, he convinced a musician at his church to teach him the drums. A milestone moment was playing guitar at age 14 during a concert on Christmas Day for some 1,700 people in his Mississauga church. Nowadays, Adesina is a guitarist in a band, he plays keys at church and he freelances at corporate events and weddings. “In my church music community, it separates the tens from the Jacks,” says Adesina of his ability to play multiple instruments.

“That’s inspiring,” says Cann. “That’s what Mozart did. He played keys and violin.”

Cann also notes the historical significance of musical communities. “This is what’s great about the gospel culture you’re part of, Pascal. If you look back in history, there are islands of musical cultures built around churches. It’s precious while it lasts.”

Cann points to the modern world: We buy music off the shelf or consume it on the radio and now the internet, rather than making our own music as humans have done for centuries. Ultimately, this has contributed to music’s low priority in the primary school curriculum, says Cann, who also completed a BEd from Western in 2009.

As for the role of a conductor, “it’s like nothing else,” says Cann. “It requires a certain moral strength of character to do it in a way that is respectful to others and that produces great music.”

Adesina knows that, for now, he will need to balance his time between music and his academic studies. “School is my number one priority, but I feel I have found that balance,” he says. “Directing the choir is an incredibly rewarding experience. I don’t see it as a binary ‘either-or’ thing.”

Cann agrees. “Music is something that you grow into and grow with. It will enrich you throughout your entire life.”