Josh Marando Is the Latest Artsci to Become MSU President 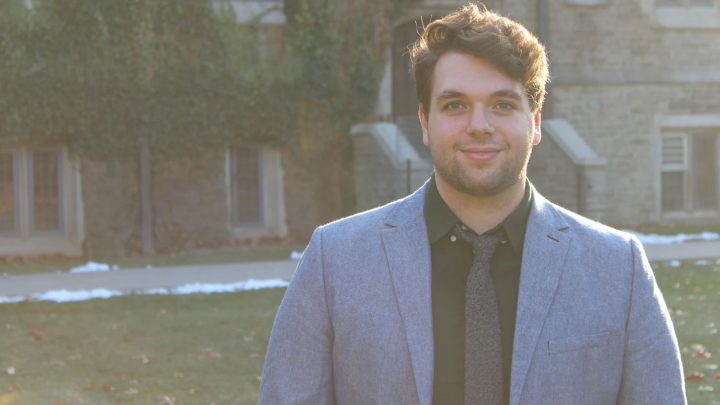 The end of April is usually a fairly quiet time for fourth-year Arts & Science student Josh Marando — classes are over, exams are wrapping up, and summer is on the horizon. But this year is just a little bit different for him. Not only is he putting a bow on his undergraduate education, but he’s also taking office as the McMaster student union’s (MSU) new President.

It’s been a whirlwind of a year, he admits, but he says running, campaigning, and being elected have been a blast.

In the three months since being named president-elect, Marando has immersed himself in politics so he can hit the ground running when he takes office 1 May. He’s gone to Queen’s Park a handful of times, had a few MPs come to campus, visited the offices of some local MPPs, and met with various university and student union stakeholders.

“I really wanted to get a handle on lobbying, because that’s going to be a big part of my role as President,” says Marando, who is set to graduate this June. “We’re going to be working very closely with the different levels of government — in fact, we already have been — due to the recent changes in Ontario.”

One such change was the provincial government’s decision to eliminate a grace period that existed to delay interest from accruing on student loans for six months after graduation. Under the new legislation, students still won’t have to commence payments for six months, but they will now be charged interest from day one.

“There’s been so much change to the framework of tuition and student financial aid in the past few months,” he says. “To combat that, we’ve not only been meeting with MPPs to acquire as much grant-based aid as possible, but also started to gear some of our attention toward the federal government.”

Marando notes that the federal lobbying is already paying dividends, as evidenced by the government’s recent decision to lower student loan interest rates and establish a six-month grace period similar to the one that the provincial government just abolished.

The other big change Marando and his executive team will face this year is the new student choice initiative, which allows all university and college students to opt out of certain ancillary fees — such as the ones that help fund the MSU.

Under the new provincial policy, “essential” fees — fees related to student ID cards, student buildings, or campus safety, for example — will remain mandatory, but all others will be subject to the choice of the student. There is some discretion left to the institution, however, and Marando says McMaster has really stepped up to support its student union.

“We’ve been very fortunate to have McMaster on our side with this,” he says. “The university is helping us classify as many fees as possible as ‘essential’ in accordance with the new provincial guidelines.”

While Marando says he firmly believes that all of the MSU’s services are essential, he knows it’s a reality that some of them won’t be classified as such due to the new legislation. He’s holding out hope that the provincial government undoes these changes sometime down the road, but, until then, he vows to continue lobbying against it.

In addition to tuition-related lobbying, Marando was elected on a platform built upon 11 other pillars. From revitalizing the Student Centre and accommodating student academic needs to improving campus accessibility and strengthening the university’s arts-based initiatives, he says he plans to make a lot of positive change during his time in office.

Marando is now the fifth Arts & Science grad to become President of the MSU. That’s a staggeringly high rate of success for a Program that represents such a small ratio of the university’s student body. Couple that with the dozens of Artscis who have held MSU VP positions and you might start to wonder why students from the Arts & Science Program are so routinely relied upon for campus leadership.

“First, the Program provides a supportive community that encourages people to take chances and think big,” Campbell begins. “On top of that, it emphasizes a willingness to tackle public issues, both in the courses that are taught and in the students who are accepted into the Program in the first place. Finally, by nature, Artscis have a penchant for taking unusual career paths — a predilection that is required in order to pursue a year managing the MSU.”

Mary Koziol, another Artsci alum who held the MSU President’s office in 2010-11, wholeheartedly agrees with Campbell, noting that his first point is absolutely a reason for campus election success.

“Running for a public position can be quite daunting, so knowing you have such a brilliant and caring community behind you is really helpful,” says Koziol, a 2011 grad. “That community encouraged me to be hopeful, curious, and bold: to ask, ‘why not?’ and ‘what if?’ I think this idealism paired with critical thinking were paramount both to being elected and then to fulfilling the role.”

Fayez Quereshy, a 1999 Artsci graduate who was 1998-99 MSU President, is on record with Mac’s alumni magazine saying that the Program’s community has “an equal thirst for inquiry and discovery” and that the “unbelievable enthusiasm” coursing through the Program allows its students to tackle problems in creative ways.

For those reasons, Suzan Fraser, the 1988-89 MSU President, says that she’s not surprised so many campus leaders have emerged from the Arts & Science Program, despite its being at a significant per capita disadvantage.

“The Program really is a good incubator for leaders,” says the 1990 graduate. “The small class sizes allow for vigorous debate, connections with professors, and inspiration to take action” — all three of which will surely come in handy for Marando during his time as President.