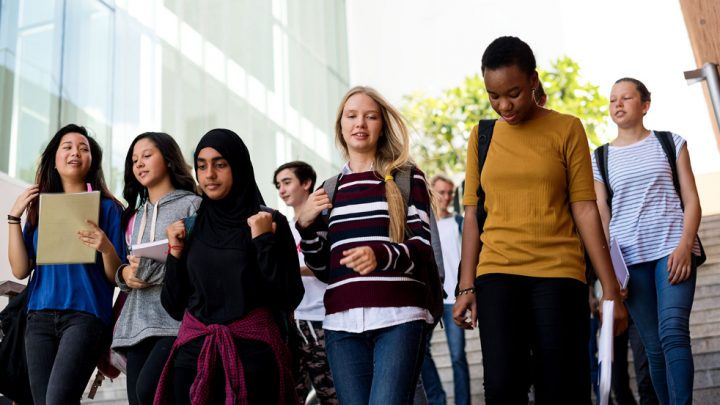 Did you know that up to 25% of Arts & Science students spend all or part of their third year studying abroad? In any given semester, you’ll find Artscis far afield — Japan, Singapore, Australia, or New Zealand; Denmark, France, Germany, Ireland, or the Netherlands; Israel, Lebanon, Colombia, or Uruguay. And while the benefits of studying abroad are plentiful, it’s not until they return to McMaster University that these globetrotting students are truly able to maximize the fruits of their travels.

Designed for Level IV Artscis returning from study abroad, international students arriving at McMaster on exchange, and Level III students contemplating global engagement opportunities, ARTSSCI 4MN2 / Movement & Integration is one of the most unique courses offered at the university.

Facilitated by Dr. Jean Wilson and Professor Hartley Jafine, this two-unit Arts & Science course prompts critical reflection on the experience of studying in unfamiliar terrain and challenges students to imagine ways of integrating their experiential learning into their lives. Ultimately, the course aims to help students develop an ongoing practice of reflective, lifelong learning.

“The course was so great,” says Artsci student Veronica Klassen. “Because it is such a new class, I didn’t have any real expectations going in, but the course material honestly turned out to be so interesting.”

Klassen, currently completing her one-semester study at the University of Auckland, has always loved to travel and has had considerable interest in exchange opportunities for quite some time now, but she says it was Movement & Integration that really helped her cement her plans to study abroad. What helped most, she says, was receiving a measured reflection from students who have actually gone on exchange so she could keep her expectations in check and carefully weigh the pros and cons.

“Until I took Movement & Integration, I was really only exposed to the ‘set’ narrative surrounding exchange,” she says. “You hear how great it is, you hear that it’s life-changing, you hear about all of these mountain-top experiences. But this course taught me that that’s not always the case. Hearing fourth-year students reflect on the challenges involved with exchange made me realize that it’s a lot more complicated an endeavour than people might think.”

“There’s a big difference between the way exchange is marketed and the way it actually plays out,” echoes Melanie Yin, who spent a term at Université Jean Moulin in France in her third year. “This class shaped my exchange experience and it continues to shape how I think about exchange today. It’s a really valuable class.”

Yin explains that Movement & Integration is “not your average course,” in that classes consist of very little lecturing. Instead, the small group learned while hiking through Cootes Paradise, co-created a poem, and discussed exchange over a potluck dinner.

“This course helped me learn a lot about myself and also helped me carry forward the learning that I did while on exchange,” she says.

Adelaide Leo, a graduating Arts & Science student who, like Yin, spent a semester in France, says the course allowed its students to pause to consider how their exchange experiences will stay with them well into the future.

“Movement & Integration was a really fabulous way to reflect on my own experience being away,” she says. “The course allowed us to think about what has stayed with us since we traveled and how we had all changed over the past year. I really enjoyed getting to share my experience with other Artsci students and students from other countries who were on exchange at McMaster.”

For Society of Arts & Science Students President Balie Tomar, the course was not only a highlight, but a means of reintegrating herself into the McMaster community after so much time away.

“The course is by far the best post-exchange support and reintegration program there is,” says Tomar, who spent half of her third year at Nanyang Technological University in Singapore. “It was just a fantastic way to integrate a seemingly distant exchange experience with my peers here at McMaster.”

Signe Aagaard, a student at the University of Copenhagen in Denmark, and Virgil Rousseaux, a student at the University of Technology of Compiègne in France, were able to experience the course from a unique perspective. As students on exchange at McMaster, they were able to think, speak, and learn in the moment, instead of doing so retrospectively or prospectively, like the majority of students around them.

“The students who had already been on exchange talked about what you could expect when you returned home, which I originally didn’t think would be hard,” Aagaard says. “It still wasn’t easy coming back, but, having talked with friends who didn’t have an opportunity like Movement & Integration, I see how lucky I was and I’m grateful I had the opportunity to take the course.”

“This course really helped me reconsider the purpose of my semester abroad,” Rousseaux adds. “Before I joined the class, I had these ideas that studying abroad was only important for my résumé, for learning a foreign language, or for discovering a new country. However, comparing my ideas and experiences to those of other people helped me realize that exchange is so much more valuable than that.”

The course itself, now heading into its second year, is the offspring of research conducted by Wilson in partnership with a number of her Artsci students, all interested in exploring the concept of study abroad as experiential learning. Presented at an international conference in Halifax and published in Comparative and International Education, her study — co-authored with five former undergraduate exchange participants — posits that post-sojourn programming would equip students returning from exchange to continue their experiential journey.

At McMaster’s 2017 International Summer Institute on Students as Partners in Learning and Teaching, Wilson worked with a new group of Artsci students and alumni to create a course that would enable study abroad participants to build upon their experiences — collaboratively, thoughtfully, and energetically — well after they return home. The result was Movement & Integration.

“The pedagogy that informs the course, designed to encourage critical reflection and promote creative thinking, takes seriously the idea of study abroad as experiential learning,” explains Wilson. “It resists a consumerist mindset, which would bracket exchange as an isolated adventure, and contributes to a more capacious understanding of the potential of international study and global engagement.”