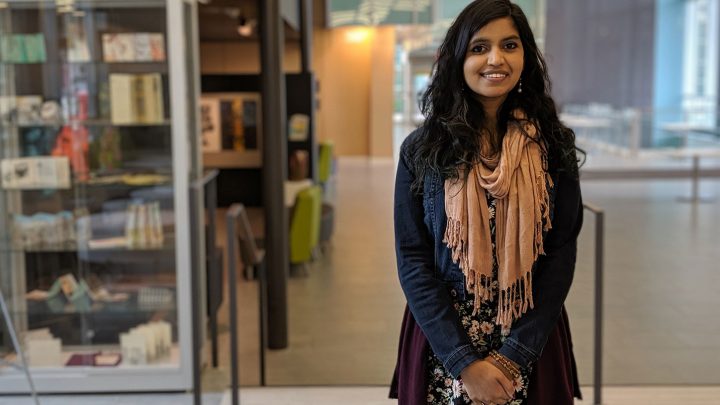 When Keerthi Manimaran walks across the stage today to receive her Arts & Science degree, she’ll be doing a lot more than graduating from university. She’ll have overcome the impossible — because, three years ago, she was in an intense fight for her life.

Born in Boston, Manimaran moved to Canada as a kindergartener. She had a good family life, a few close friends, and went to a decent school. Her parents — mom, a dentist, and dad, a software engineer — showed her the value of hard work, which she applied to her studies as an International Baccalaureate student.

Eventually, she was admitted to McMaster’s Arts & Science program — but despite her academic success, Manimaran says her younger self was “a top spinning in no particular direction.”

In her third year, this would all change.

On 1 October 2016 — homecoming weekend — a childhood friend visited her from Western. To escape the commotion on campus, they took the bus into downtown for a quiet lunch.

On the way to the restaurant, both women were struck by a vehicle as they crossed Wilson Street. The impact propelled Manimaran into the ground, fracturing her skull and causing her to immediately fall into a level-three coma from a severe subdural hematoma, or brain bleed. Her friend’s leg was crushed by the vehicle.

She was rushed to Hamilton General Hospital, where she lay in a coma for 30 hours and remained intubated and incapacitated several weeks even after regaining consciousness. In addition to her brain bleed, she also injured her left shoulder, lost a significant amount of blood and damaged the hearing in her left ear.

The weeks that followed the accident were a blur for Manimaran — even now, the first day she can recall being in the hospital was 15 October, two weeks after the accident.

She says she remembers feeling like something in her body had stopped working, and like her insides were still in a coma — but she had no way of articulating that because she couldn’t speak or write.

“I had a lot of really awful thoughts at that time,” she recalls. “I remember thinking that there was something dead inside of me. At one point, I thought that there was a bomb inside of me. I thought I was handcuffed to the hospital bed, and I felt like my body was being pulled apart by chains. I was panicking in my head, but I had no way of expressing it.”

Slowly, she began to comprehend the reality of her situation. She became more and more coherent every day and, as her health began to improve, she was transferred to Brampton Civic Hospital so she could be closer to her family home.

At this point, she began to reflect on her former life. She missed being a student — she missed Artsci, McMaster and Hamilton. Having it all taken away so suddenly made her realize just how much she had taken for granted before her accident.

“I kept telling myself that ‘if I can just make it through this, I will never take it for granted again,’” she says. “I told myself that this was a turning point for me — that I was going to do something important with my life. I told myself I would maximize my potential from here on out.”

Determined to do so, she pushed herself a little bit every day. First it was light reading. Then she started writing. Eventually, she began to take on small physical challenges, like trying to fold her clothes without dropping them.

In February, Manimaran was feeling proud of the strides that she had taken. Confident that she was on the road to recovery, she broached the idea of returning to school with her occupational therapist. She recalls that, while her therapist didn’t discourage her from returning — in fact, she acknowledged her strong will and her significant cognitive improvements — she was hesitant to make the recommendation.

Heeding the hesitation, Manimaran decided to put off her return to school and instead test her academic abilities by attempting to learn a new language.

“In my opinion, there are only a few things that are truly capable of stretching your brain creatively — theoretical math equations, philosophy, picking up a new instrument, or learning a new language,” she explains. “I’m fascinated by language, and I knew it would be challenging enough for me to accurately gauge where I was at academically, so I thought, ‘why not learn Japanese?’”

Manimaran chose Japanese because she wanted to challenge herself to “think laterally and deeply,” which meant learning a language different from the five languages that she already knew — English, French, Tamil, Telugu, and Hindi.

Picking it up a lot quicker than expected made her realize that she was now ready to attempt a return to school. Eight months after the accident, she enrolled in two courses over the spring/summer term – which she passed with flying colours.

By the end of the term, though, instead of feeling triumphant, Manimaran felt ill, exhausted and weak. She was nauseous for four days straight and had chills throughout her entire body for over a week.

“I pushed myself way too hard,” she admits.

Undaunted, Manimaran was still intent on returning to school full-time in the fall.

“I remember thinking that if I died pushing myself too hard, then at least I’d have died trying to do something with my life,” she says. “At least it wouldn’t be a slow death, just doing nothing in my house.”

Looking back, she acknowledges that it was reckless to think like that, but she also adamantly believes that her determination was a key part of her recovery.

So Manimaran returned. This time, she paced herself. She used accommodations where she felt they were necessary. She studied hard, she streamlined her focus, and she didn’t take a second for granted. She wrote her thesis about her recovery process, and made what she hopes will be lifelong friendships with people from all across the university.

Manimaran says that she didn’t think her graduation day would ever come – and now she has a very specific goal for her future.

She wants to “stand on the Senate floor one day and proudly declare that OHIP has been expanded to include all allied health programs to bridge the equity gap between trauma survivors, people with psychological services and those with biomedical problems” — and she’s already taking steps toward achieving it.

She’ll be conducting research on behalf of the MacPherson Institute throughout the next academic year, and then plans to go to grad school in social work, public policy, or law.

And while she still battles mobility issues, hearing problems, and a long list of other symptoms  from the accident, she says she tries not to let them affect her newfound drive or passion.

Wherever she ends up, she says she’s happy to no longer be a top spinning without direction. She’s happy to have a new lease on life, to have a purpose, and to have the motivation to succeed beyond expectation.

Right now, though, she’s most happy to call herself an Artsci grad.

“Graduating with the Arts & Science class is something that is always going to be really special to me,” she says. “I’m so unbelievably proud to have done it.”