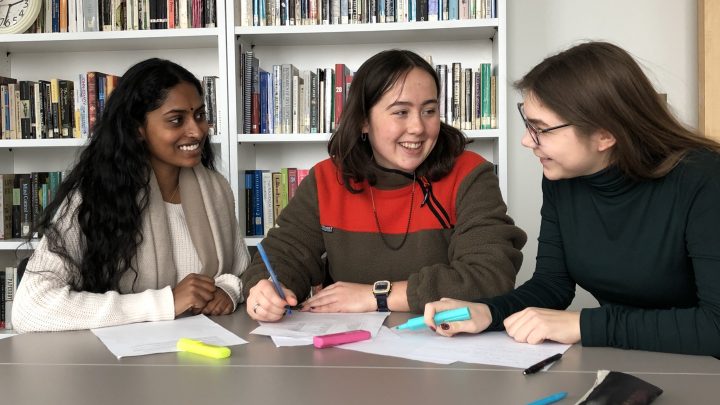 Daniel Carens-Nedelsky and Leanna Katz, Arts & Science Program grads (2012), were all too familiar with the trope of the indecisive Artsci. “We wear the decision not to choose between the arts and sciences as a badge of pride, but we have both struggled at times to make life choices.” The experience of agonizing over decisions, and, occasionally, conquering that feeling led Daniel and Leanna to develop the new ARTSSCI 4MN1 module “Theories of Decision-Making and Judgement,” which took place at McMaster University 18-19 January 2020.

“We are also aware that many Arts & Science students go on to roles in which they will make decisions that impact others,” Daniel adds. “So, we considered decision-making from an institutional standpoint and explored what it means to make fair decisions.”

Drawing on their backgrounds in law, Leanna and Daniel grounded the course in legal decision-making. Leanna explains: “The legal system is one mechanism that society has developed to resolve disputes between people that cannot resolve themselves. As a result, it provides a useful case study for analyzing what are appropriate institutional frameworks and substantive values for making difficult decisions.“

In true Artsci fashion, Daniel and Leanna agreed that to engage with the complexities of decision-making, the course needed to be interdisciplinary. Daniel explained the choice of disciplines: “We chose to draw on psychology and feminist legal theory because these fields expand ideas we explored about decision-making in the fields of law and psychology.” Leanna highlights some of the less traditional sources of learning in the course: “We wanted to put the complexity and unknowns of decision-making front and centre. We used fiction and poetry to help us digest and critique traditional assumptions about decision-making. We also tuned into our bodies as a source of information for making decisions.”

Elaborating on the psychology module, Daniel says: “Drawing on psychological research, we addressed a number of subtle influences on decision-making, including in-group out-group bias, choice architecture, the problem of too much choice, and differences between ‘system 1’ and ‘system 2’ reasoning. One idea that sparked discussion with the students was philosopher Ruth Chang’s theory that by creating reasons for a certain choice and committing to that choice, we not only make a choice, but actually create our identity.”

The feminist theory module challenged the assumption that people are simply individuals who make “autonomous” decisions; rather we are part of communities that shape our perspective. Leanna explains: “One idea I wanted to share with students is that when you’re feeling stuck making a decision, perhaps it’s not because you don’t know yourself – but because you belong to diverse communities and so you have good reason to be drawn to multiple options.”

Arts & Science student Rhea Murti describes how this idea impacted her: “When we talked about how an enlarged mentality involves imagination and communication, which leads to coming to know yourself more fully – it felt like a lightbulb going off in my brain because it just made so much sense to me! The idea that belonging to a community is essential to forming judgement seems to me a more holistic and realistic way of understanding the social factors that inform our judgement, and the people and things that cause us to choose a certain way.”

Other students valued the hands-on components of the course. Level III Artsci Brianna Reed reflects: “I learned that the goal of the course wasn’t what I thought it was – to learn some perfect pattern of decision-making to follow – but instead to give myself time to breathe, reflect, move, and meditate. The embodied decision-making exercise taught me to do this, and to listen to my body. I had never considered this before.”

It seems the ideas from the course will be of enduring value to the participants. Artsci student Maanvi Dhillon shares: “It’s been really interesting to see how often some of the concepts we talked about came up in my daily life and other courses the following week. As soon as it ended, I noticed references and reminders of what we discussed everywhere. This stuff is relevant!”

Leanna and Daniel sum up: “We hope the course will help students cultivate awareness and gain insight as they exercise decision-making and judgement – and proudly wear these qualities as part of their Artsci identity!”